Home owners in Cattle Country Kiowa CO couldn’t be more smitten with their custom “New Level” in
the basement of their Kiowa home. When they contacted Jerry form CIDbasments.com they had no idea
of the potential that the dark, dank basement space would hold. By the time their initial walk through
with Jerry was complete they were just starting to see what magic he could come up with. After the
conceptual drawing and estimate were complete, they could not wait to get started. With a few tweaks
to floor plan it was a go and the magical transformation began. With over 40 years of remodeling
experience in the Denver Metro area the CID ltd. team was ready to set things in motion. Permits were
in place and the tricky framing aspects were under way. The house is a modular style home which makes
the framing for the ceiling a bit of a challenge. However Jerry’s hands on experience made the challenge
simple and in a couple weeks’ time the basement was ready for rough inspections.
Even with Jerry and his wife off on their 30 th . Year wedding anniversary trip, Jerry’s right hand man Todd
and the experienced crew kept the project moving ahead of schedule. After flying through inspections
the fun details began with the trim and doors and then the custom cabinetry that is hand built in the CID
ltd. wood shop. This aspect of the project has been a calling card for the company since company
founder and President Jerry Vidmar started the company in his parent’s garage at the age of 16.
Custom cabinets including the latest modern or traditional styles, along with the latest trends in modern
cabinetry such as self-closing drawers and soft close European door hinges. The unique designs that are
allowed by building custom cabinets will set any basement apart. Other custom architectural elements
such as the dimensional stone and barn wood beam wood mantle surrounding the gas fireplace add
warmth and charm to the family area. Along with the convenience of the simple butler’s pantry style
service bar entertaining is a blast for the homeowners. They say the neighbors are just astounded with
the “New Level” and its custom features.
The five piece bathroom with furniture style vanity and vessel sink along with an oversized soaking tub
and large shower convinced the owners that they should just move in……So instead of allowing their
college age daughter to take over the space they decided that they would move into the basement full
time. The daughter now has the master bedroom and bath on the main level of the home and the
owners are enjoying there “New Level” full time.
Call Jerry today to see what magic he can create for you. 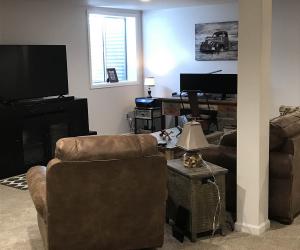 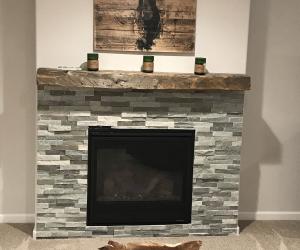 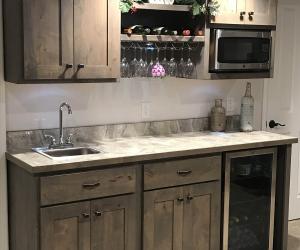 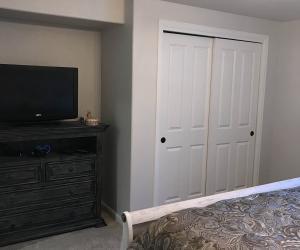 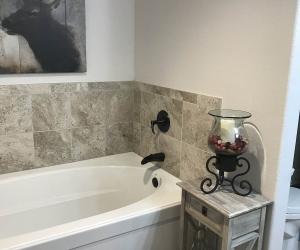